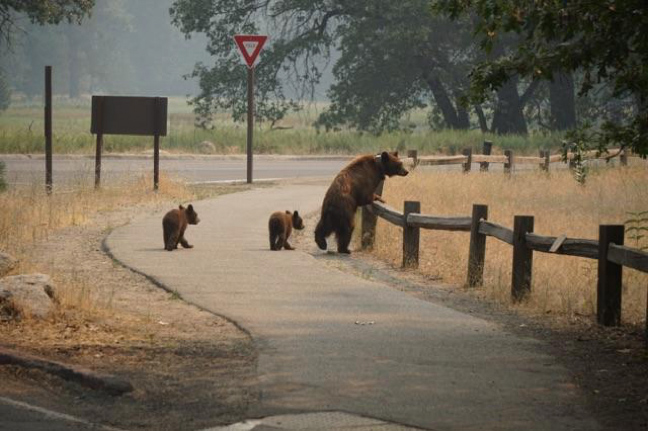 On July 13, 2018, the Ferguson Fire started in the Merced River Canyon just west of Yosemite National Park. At the time the fire started, the park was experiencing peak season visitation and biologists were monitoring up to 20 different bears foraging naturally in Yosemite Valley on a daily basis. Yosemite Valley and some other areas closed to visitors from July 25 to August 14 due to health and safety concerns. Employees and residents were also evacuated for part of that time, leaving only firefighters and emergency personnel behind. Consequently, Yosemite Valley was unusually empty and exceptionally quiet. As a result, bears immediately began frequenting many areas normally teeming with people during bustling summer days.

Black bears are naturally curious, but shy away from people. They generally use corridors of forest cover to make loops around their home ranges in Yosemite Valley while searching for food. As opportunistic omnivores, they prefer food sources that are readily accessible and away from busy human developments. Even food conditioned bears prefer to use the cover of night and forest to enter heavily populated areas.

During the closure of Yosemite Valley, bears spent more time in developed areas in search of natural food sources. In the absence of park visitors, they boldly crossed roads, bike paths, and walked through empty campgrounds, parking lots, and through other areas that are typically swarming with people. Bears took advantage of the historic apple orchards, gorging themselves on apples. The Majestic Yosemite Hotel (formerly The Ahwahnee) lawn, usually filled with visitors picnicking , wedding parties and kids playing was now instead the location two male bears chose to play together, grazing on the grounds. This behavior gives biologists a glimpse into a more wild Yosemite Valley when it was only sparsely populated and much less visited. A time when black bears and other wildlife were able to chose the path of least resistance, instead of the path of least population to obtain natural food sources such as fruits, insects, acorns, and grasses.