Where Do Bears Go in Winter? Bear prints of a sow and her cub in the snow

It’s January, but Yosemite has only seen a small amount of snow. So where are the bears? Are they hibernating yet? The answer might be more complex than you’d expect. Hibernation in black bears is dependent on food availability – meaning that once a bear is using more energy than they can find, they’ll hibernate. Bears that continue to find enough calories foraging in the late fall and winter may go into hibernation later, or skip it altogether (these bears are more often males). Likewise, if bears have access to human food or trash in the winter, they may skip hibernation altogether, even in winters with heavy snow accumulation. There were several accounts on social media of this occurring last winter in the Tahoe Basin. It’s critical to maintain proper food storage year-round. Making the assumption that all bears are hibernating as soon as the weather cools off is a common mistake that can be much more difficult to correct than maintaining proper storage of human food and garbage year-round.

Most years, the majority of bears in Yosemite begin closing in on a hibernation location starting as early as October. GPS data paired with observations of family groups in the spring have shown that pregnant females are the first to select dens. Bears in Yosemite typically select hollowed out fire cavities in large trees or caves formed by large rocks in talus fields. The majority of the dens we have located here in the Park are very difficult to access with protected entry ways and good vantage points to observe potential threats from the entrance. Once the den location is selected, bears may continue to move around scouring the area for food while continuing to prepare their den. We can see this behavior using their GPS data as they begin to travel much smaller distances, circling back to their chosen den site. GPS data has also shown that bears often move into their dens, even traversing long distances, in advance of the first significant snow storm. Once the availability of fall foods fade, they will enter their den and begin hibernation (typically later in November, and December). 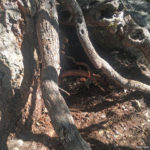 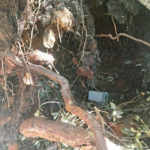 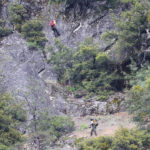 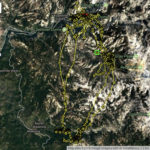 Bear tracks showing 4 months of movement prior to hibernation 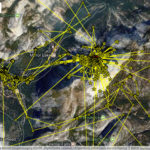 In the late fall and winter months, we remove the BearTracker data to ensure the locations of the bear’s dens are protected. Hibernation is incredibly important for bears and is physiologically astonishing. While hibernating,  bears don’t eat, urinate, or defecate. Preparation for a very short gestation drives pregnant sows into dens that will protect them from the elements and predation. Cubs are born in late January and nursed for the first few months of their lives. It’s an important time in a cub’s life since they are born weighing less than a pound and must gain several pounds before venturing out of the den. Once in hibernation, bears in Yosemite typically don’t become active again until late March or April. When they do come out, they’ve lost up to ⅓ of their body weight, and spend their time foraging on early spring foods-usually fresh grasses in meadows. Males are typically the first to emerge for the season while sows with cubs are usually the last to emerge for the year.

So, where are the bears now? Most of them are hibernating, but not all! This is turning out to be one of those late hibernation years for some bears. We have observed several bears continuing to forage on this year’s plentiful Black and Live Oak acorns at lower elevations throughout December. Even females and their cubs were out late, as you can see in the image above of a sow and her cub’s tracks in the snow that was taken in late December.